Every year, around February, we greet a pair of Great Horned Owls. The first sign is finding the mother sitting on the nest day after day, patiently tending her eggs and waiting for her chicks to hatch. Given their location up in a tree, we can't see any of the chicks until they are able to stand and peer over the edge. The parents, for some reason, have chosen a very busy location -- right alongside a path at the entrance to a local park, where people are walking, talking, running and biking all day long. This makes the owls, and owlets, quite habituated to humans and all of the activity going on around them. They have become local celebrities to those of us who live nearby.

The parents have successfully nested in this tree for at the past three years. Three chicks fledged the first year, only one survived the second year, and three fledged again this year. This blog entry is a photo story of one of this year's owlets, who took a nasty tumble one day.

Here's a photo of the happy family 12 days before fledging: 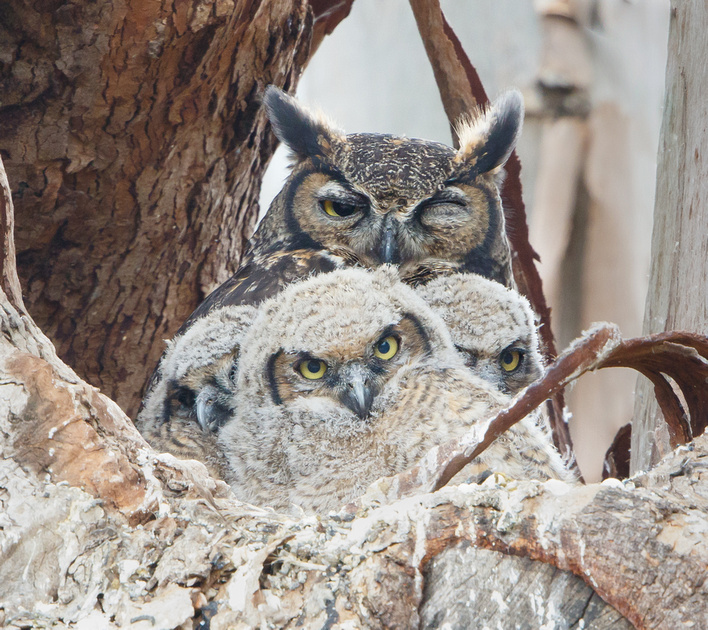 Finally, one morning, upon visiting the site, we found the nest empty. Two of the owlets, pictured below, were resting on a branch near the nest. The mother was perched nearby, but the third owlet was not visible. This is not cause for concern, or even surprising, however, as young owls generally begin "branching" right after leaving the nest and are difficult to find once they're hidden by the leaves of the nest tree or in an adjacent tree. 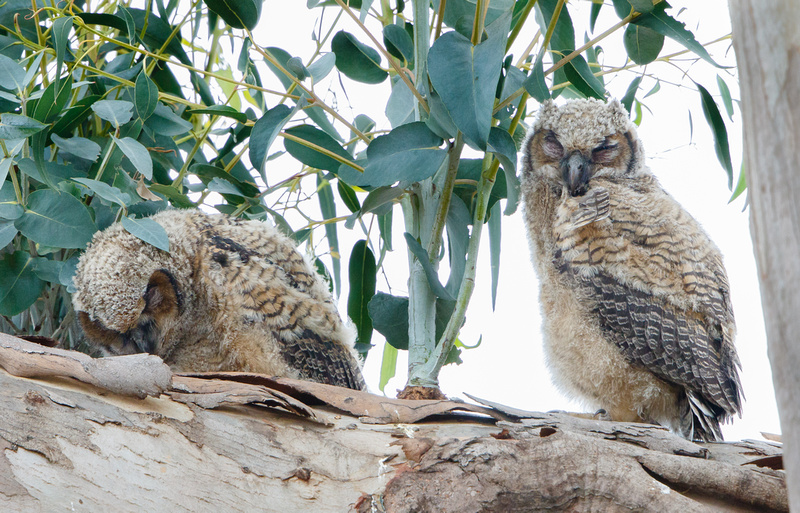 As I was watching and photographing this pair of owlets, a hawk came swooping down toward the young birds, causing one of the owlets to lose its balance and tumble to the ground.  It is not unusual for a young Great Horned Owl to fall from its nest near fledging time. In fact, one young bird suffered a similar fate two years ago at this same nest site. They generally walk to a bush to find protection, then clamber up a nearby tree (using a combination of clawing and flapping) when it's safe to do so.

This owlet was not hurt by the fall, but also not happy with the situation in which he found himself. Although habituated to humans from the comfort of the nest, it was quite a different matter to face them from ground level. Here's a photo of the hapless young bird soon after the fall: 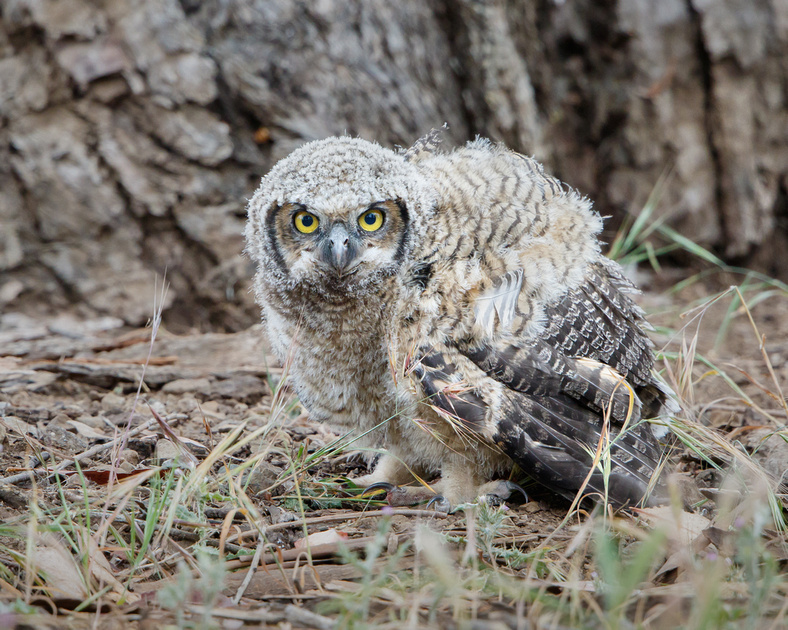 The first problem our fallen owlet faced, however, was the throng of human fans who wanted to get closer, as well as the continual stream of walkers and runners along the park path, just a few feet from where he fell.  As runners whizzed by, he would strike a threatening posture, as illustrated in the photo below: 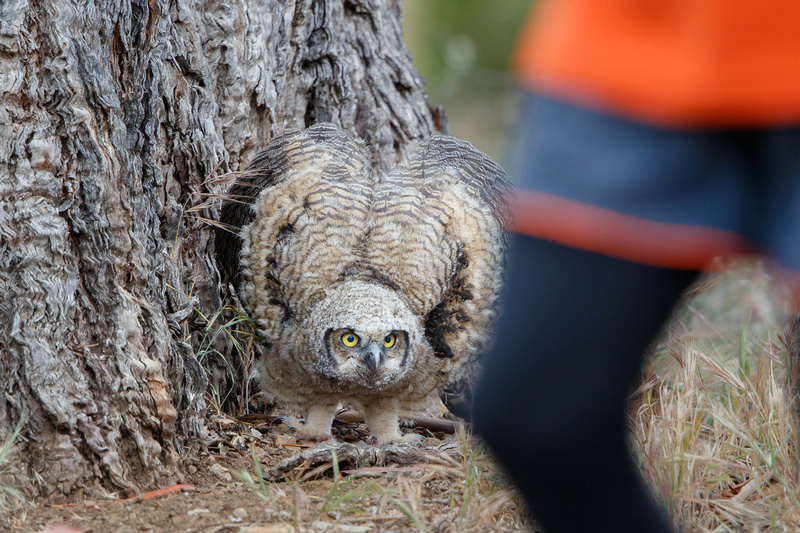 The little owlet eventually calmed down and gained his composure: 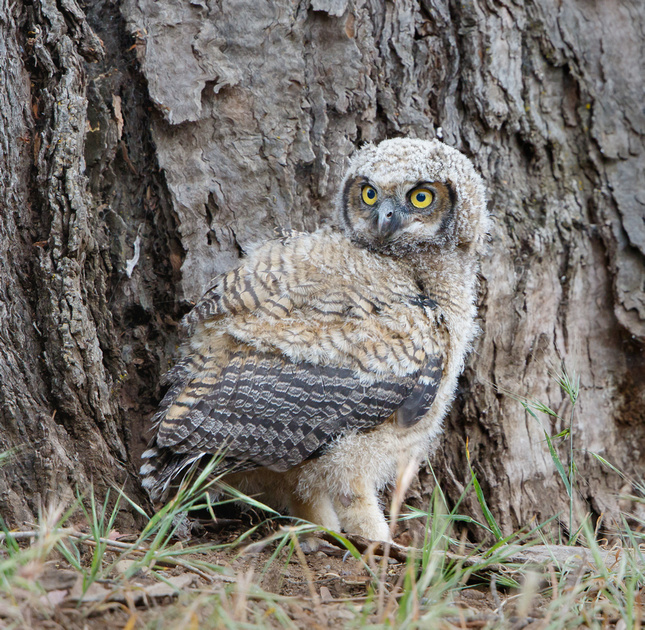 He soon summoned the courage to walk over to some nearby bushes, where he could hide from the surrounding human commotion. And thanks to a concerned park ranger, a perimeter was erected to discourage people from entering the area. The photo below shows the off-limits area, where the owlet had sought refuge. The tree in front is where the nest resides (right next to the asphalt path). 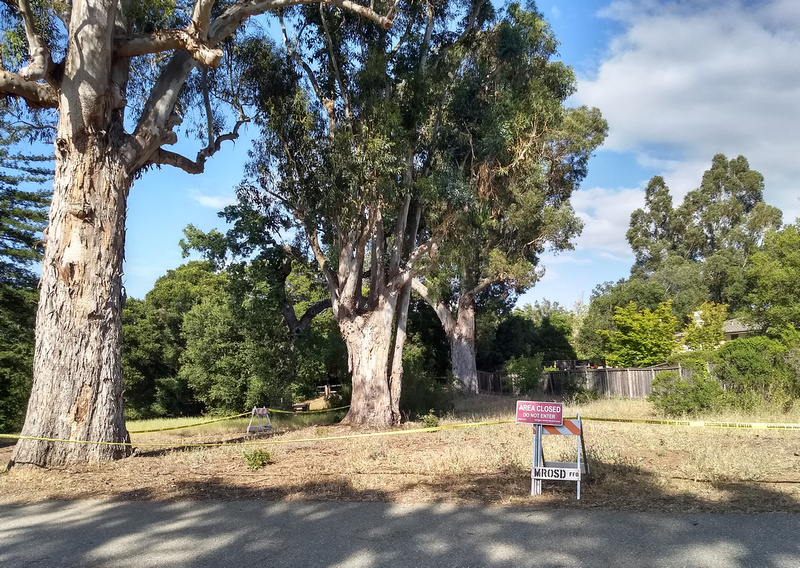 Typically, once owlets begin branching, they do not return to the nest. So I was surprised, upon returning the next morning, to find an owlet sitting in the nest all by himself.  I, along with some of his local fans, decided that this lonely owlet is the one who fell the day before -- that he scrambled up the tree late at night to seek the security of his only known home. We further decided that he said upon completing the climb: "Where is everybody?" 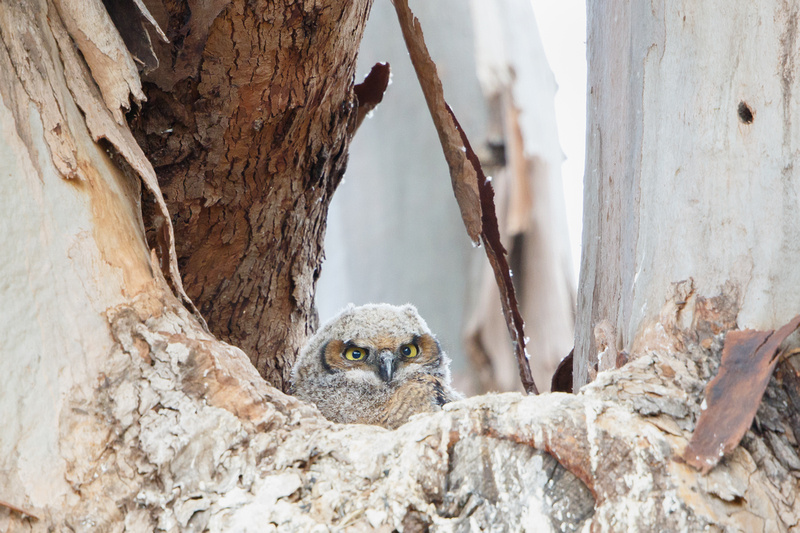 The lonely owlet remained in the nest for another day before venturing out. The young owls will stay in the area and continue being fed by their parents for a few more months, at which time they will disperse and find their own territories and partners. The parents, I hope, will return again next year to raise another brood of owlets.

sarah SLATE(non-registered)
Steve- Thank you for this thoughtful account of our owl family. The resilient baby owl is well fed and is venturing further out on the limbs of the tree today.
Sarah
Vicki Welsh(non-registered)
Great photos documenting this owlet's story. Hoping for a good outcome! Thankfully, you took action by contacting a park ranger to assist in protecting the little guy. If you are able to learn how the owlet makes out, I'm sure many would be interested, including myself.
No comments posted.
Loading...
Recent Posts
Skimming for fish Skimmer Skirmish Eating On The Run Interspecific Feeding. Again! How to Prepare a Crayfish A Busy Day at the Cormorant Colony One Day in Sulawesi Burrowing Owl Family Feeding Time for Peregrine Chicks Curious Owlets, v2
© Steve Zamek
Powered by ZENFOLIO User Agreement
Cancel
Continue