I recently discovered a family of Western Bluebirds, where the parents were actively feeding their young. The shooting conditions were not ideal, but I did my best to capture the birds' behaviors.

Here's what the nest looked like.  It's simply a natural cavity in an old fruit tree.  A little nestling is visually exploring the world from the safety of the nest: 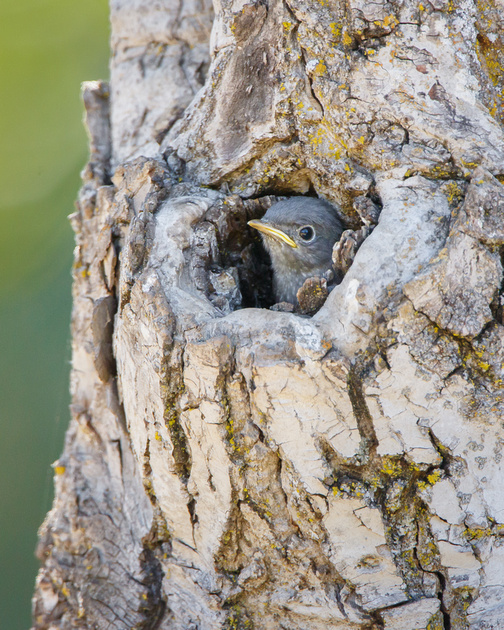 Both parents would regularly fly in with food (typically worm-like insect larva) for their young.  I expected to see several chicks frantically begging for food, but saw only one at this hole at feeding time.  I therefore assumed that there was only one chick in the nest. 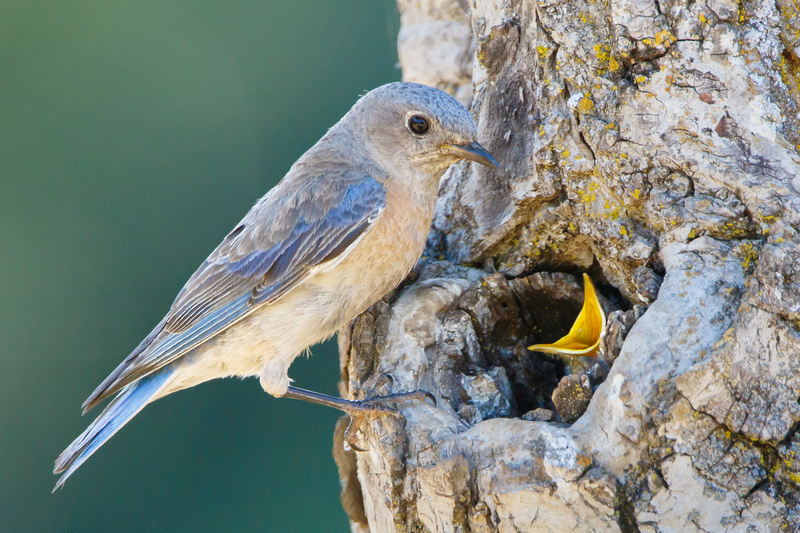 Nestling being fed by mother: 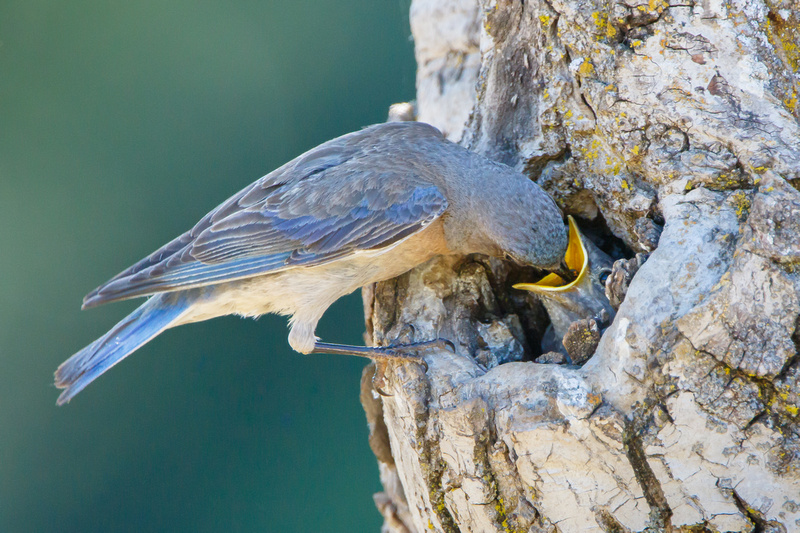 A feeding is typically a very quick operation, as illustrated in this video:

Bluebird feeding #2A Western Bluebird nestling gets fed by its mother.

The parents would occasionally remove a fecal sac. (A fecal sac is a membrane encasing the fecal matter, making it a simple matter to remove from the nest.)  Here's the mother with a fecal sac it had just removed.  She will fly off with it and drop it some distance from the nest.  The nest is kept clean and sanitary, and odors which might attract a predator are moved away from the nest. 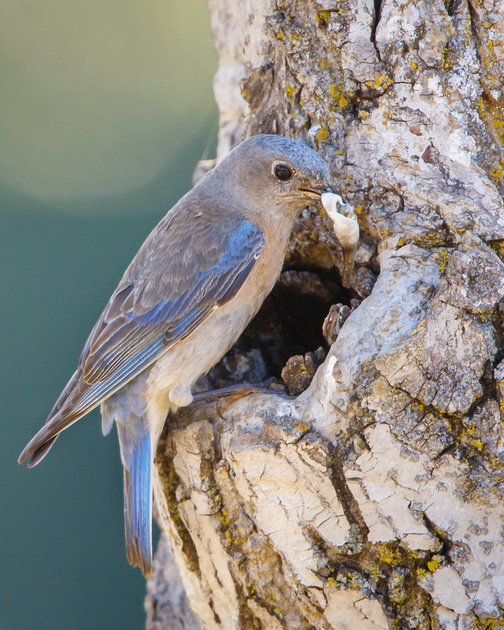 Here is a fecal sac being presented to a parent.  You can see how the nestling raises its posterior, making for a convenient transfer to the parent: 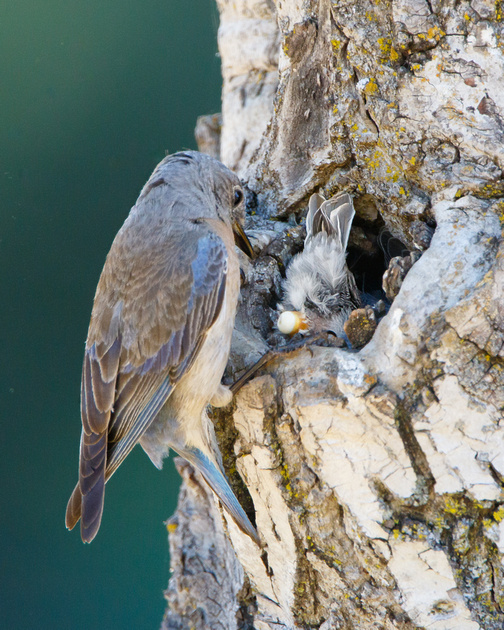 The video below illustrates a fecal sac transfer.  Notice the quivering tail feathers of the young bird, presumably to alert the mother to expect a fecal sac:

Fecal sac removalA Western Bluebird nestling presents a fecal sac to its parent, which it dutifully carries off.

On my second visit I was pleased to find not only a second entrance to the nest, but another nestling!  Here you can see both nestlings, each with its own viewing "window": 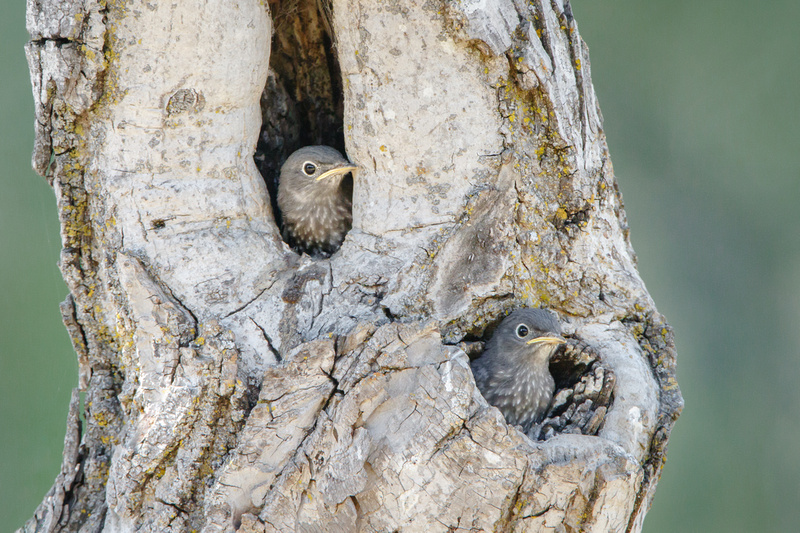 I returned the next day, only to find that the nest was empty: the birds had fledged. They could be anywhere. However, I heard the little bluebirds calling in the distance. I followed the sound and eventually found them in a tree about 150 feet from the nest. They were well hidden among leafy branches, but by peering through a small opening I was able to see them.  And what I found was a third nestling!  They were huddled together on a branch: 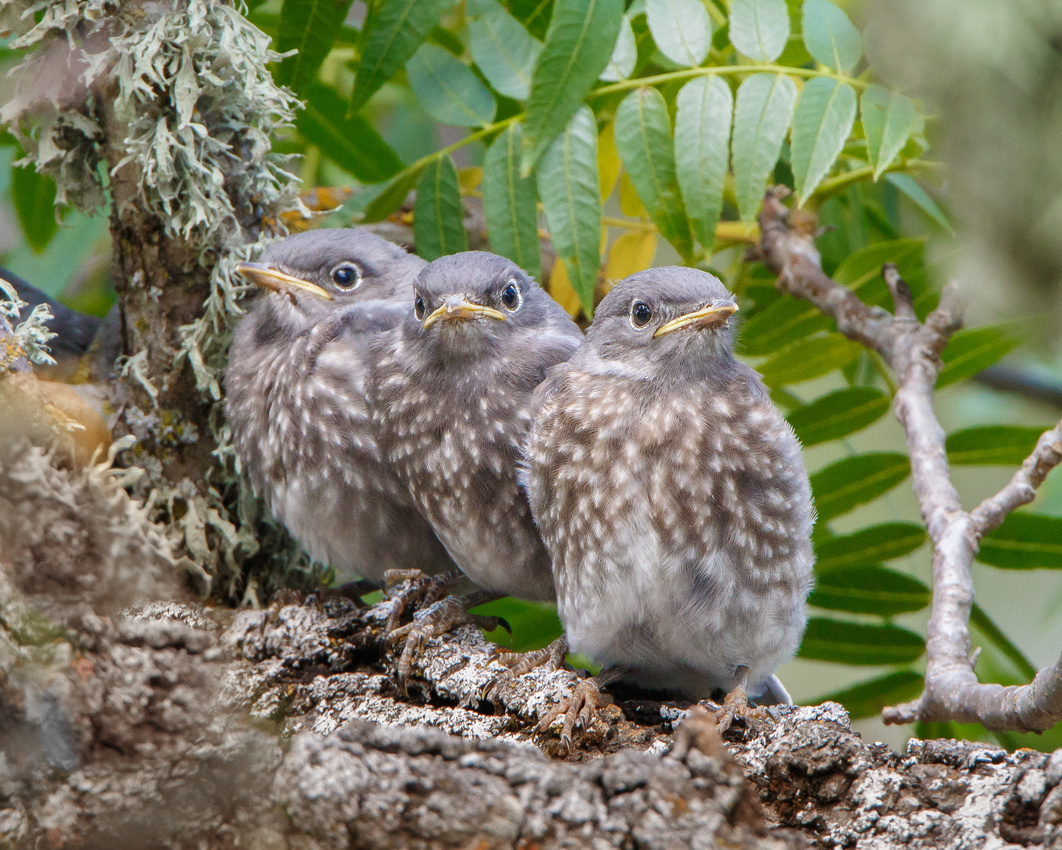 The parents continued to feed the chicks, as they will for some time to come. Here is the father feeding one of the fledglings: 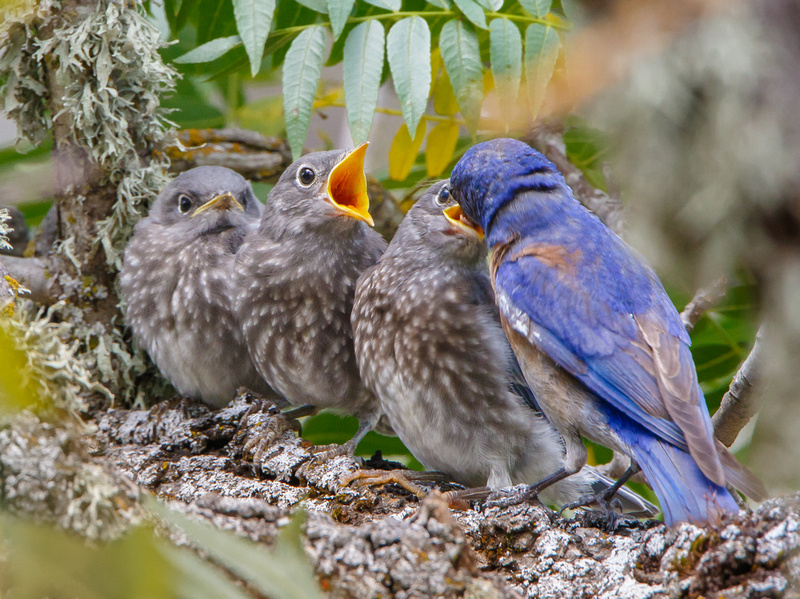 As I observed the young fledglings, I was again surprised: two more little bluebirds!!  There were actually five chicks in that clutch, unbeknownst to me when they were hidden in their nest cavity. Here they all are: 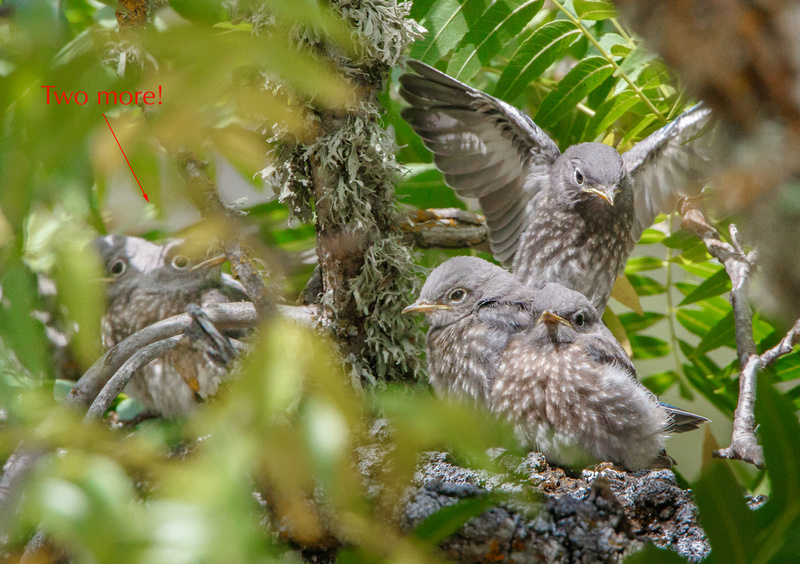 That was the last I saw of this bluebird family. They all seemed healthy, and the parents were dedicated to feeding them. I expect that they will all grow up quickly and go off on their own very soon.

Update: I returned 11 days later and was able to find the bluebird family again, not far from the nest tree. There were at least 3 fledglings present (possibly more) along with both parents. The young are now able to hunt for insects on their own, but the parents did feed one of the little ones once while I was there. The whole family stayed close together, but moved about quite a bit within a couple-hundred-foot radius. This young bluebird (11 days after fledging) caught a spider on its own. 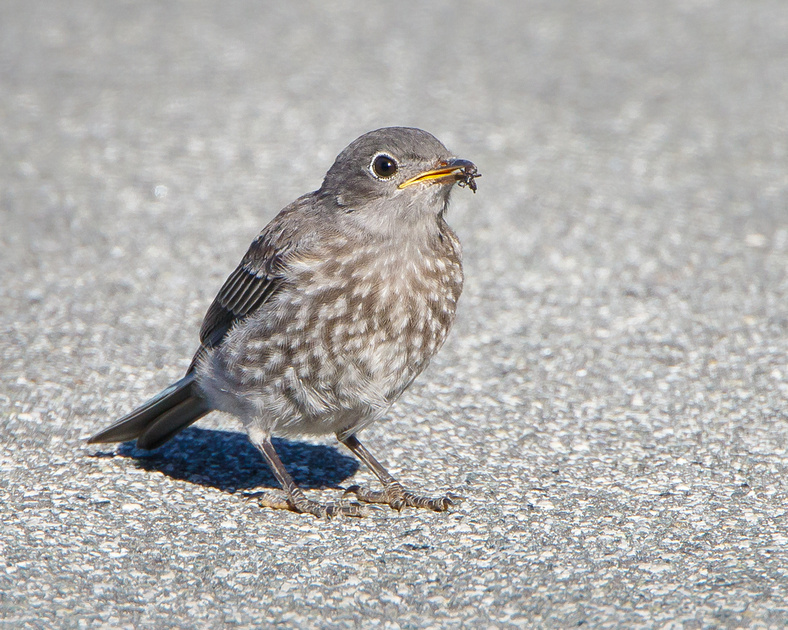