While spending a few days in the Sierra for some bird photography, I was lucky to find a Mountain Bluebird nest with fairly mature nestlings, all being fed and looked after by their attentive parents. This alone was a great find and photo opportunity, but things got even better when the Bluebird parents received a bit of help from an uninvited (and unwelcome) visitor.

Here are the 3 nestlings peeking out of their nest hole: 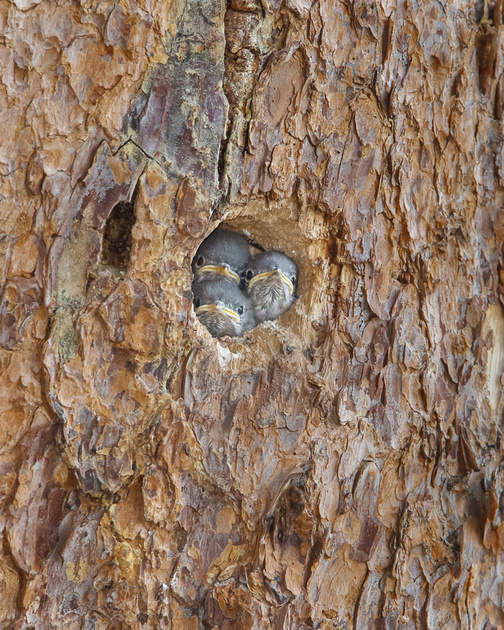 The lovely male Bluebird seemed to always be present, but rarely fed the chicks, relying instead on his partner to take on most of the feeding responsibilities. 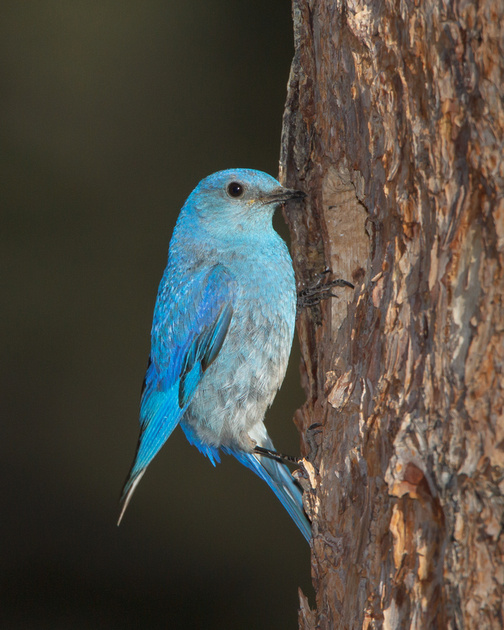 Female Mountain Bluebird feeding a grasshopper to the eager nestlings: 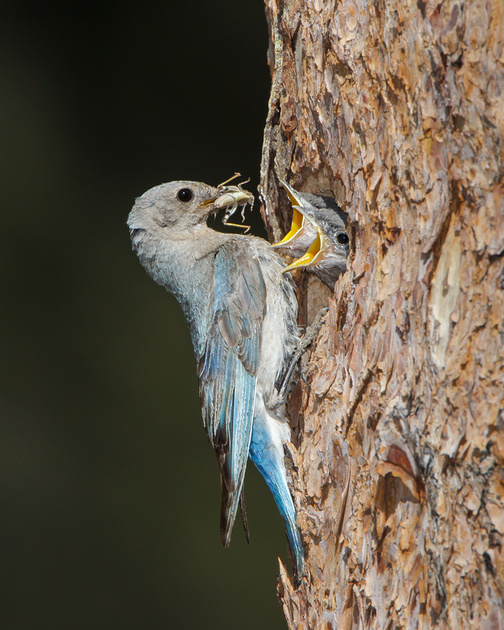 After observing the birds for a while, it soon became apparent that an interloper had entered the scene -- a Pygmy Nuthatch (a bird half the size of an adult Mountain Bluebird, and already dwarfed by the nestling): 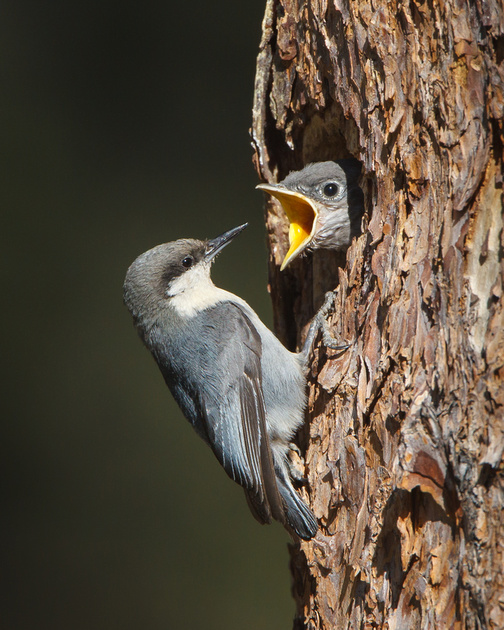 Moreover, this little Nuthatch fed the chicks with the same dedication as the chicks' biological mother, consistently feeding the chicks as fast as it could collect insects: 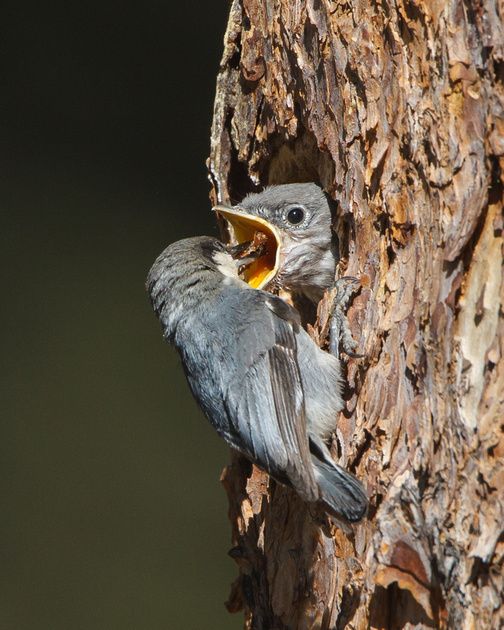 The male Mountain Bluebird would often appear when the Nuthatch attempted to feed his chicks and drive the interloper away. But the little Nuthatch always persisted and succeeded in delivering the food that it had for the chicks: 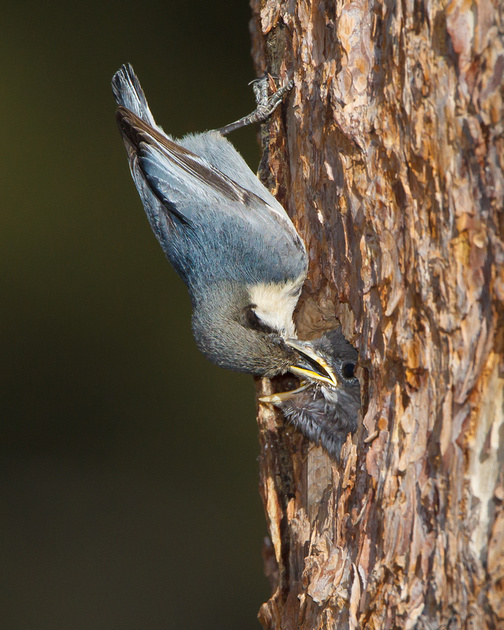 An additional task taken on by the female Bluebird was removal of the fecal sacs from the nest: 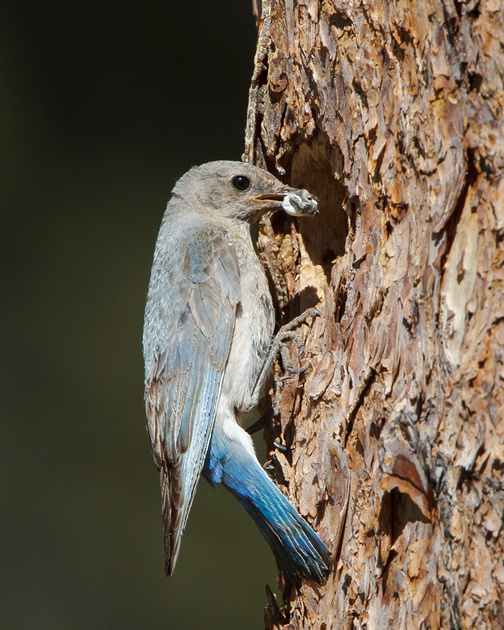 But not to be outdone, the little Nuthatch also diligently removed the fecal sacs, although with some difficulty, as it had trouble staying aloft as it flew off with that heavy load: 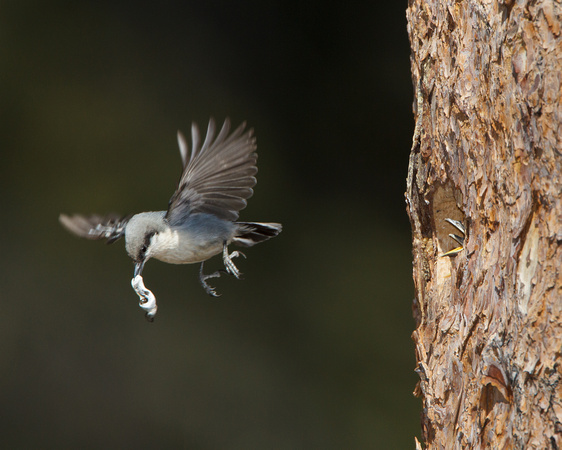 It is not uncommon to find nestlings being fed by birds other than their parents. There are generally two circumstances under which this occurs:
1) Brood parasitism: This behavior is characterized by a female bird depositing her eggs in the nest of other birds (typically other species), and left to be tended and raised by the foster parents.
2) Nest helping: Nest helping generally describes the social structure whereby the offspring of a mating pair assist in raising the young of their parents. A more general form of this behavior would be cooperative breeding.  But in both cases, the behavior is characterized by strictly intraspecific relationships.

Neither of these two cases explain what I witnessed and what these photos depict. When brood parasitism occurs, the biological parents do not participate in the raising of their offspring, which is clearly not the case here, as both Bluebird parents are involved in raising their young. And this is not a typical nest helper scenario either, as this situation is not intraspecies; the helper in this case is from a completely different taxonomic family.  What we have here is cross-species or interspecific feeding. This phenomenon, although not unheard of, seems to be a fairly rare occurrence.

The underlying causes of this behavior remain uncertain, but a good survey of reports of interspecific feeding, as well as some possible reasons for such behavior, can be found in this article by Shy.

More photos from this nest site can be found here.

An article I wrote with Ed Pandolfino can be found here.

This nest was found in the Tahoe National Forest in Nevada County, CA in June of 2014.